Advergaming: This is How Video Games Help Brands Promote Their Products 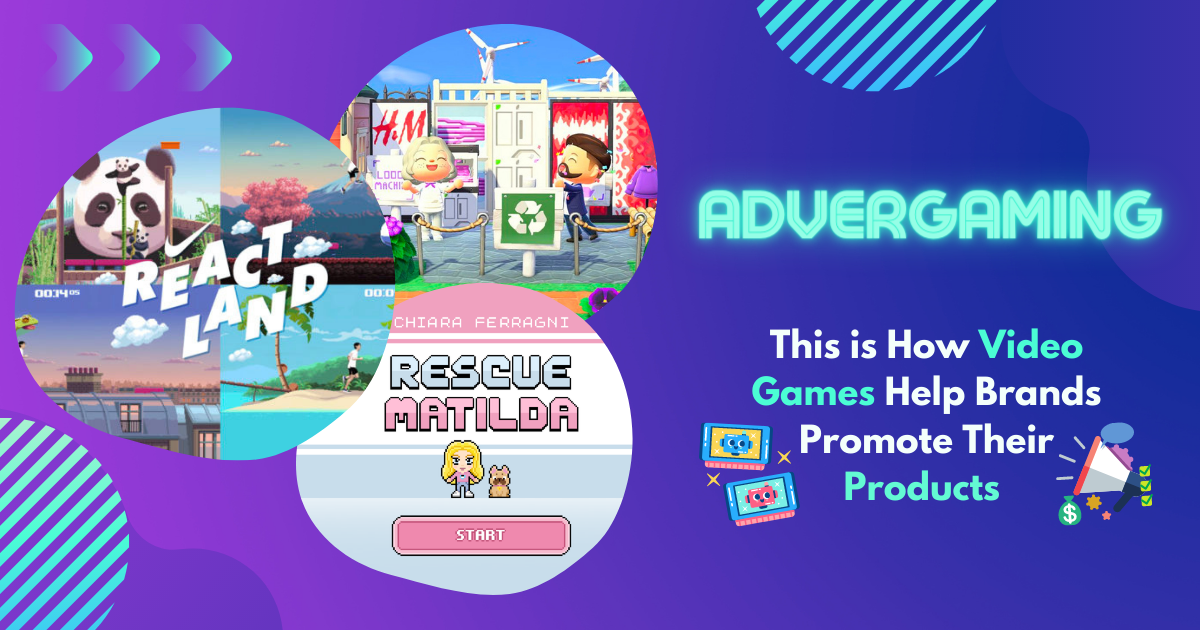 Last month we talked about how video games can be used to achieve educational goals, but what most people don’t realize is that they can be useful in other areas too, such as advertising for example. In fact, recently many brands have started to use video games to reach consumers and promote their products. Curious to know more? Keep reading!

Let’s start with the definition of advergame: as you can imagine, the term comes from the union of the English words “advertising” and “game” and it is used to refer to a video game that uses advertising techniques to promote products or services of a specific brand. As underlined by Inside Marketing, in these types of games everything is designed in order to convey the advertising message of the brand, from the narrative up to game actions.

In a broader sense, advergames can be considered a form of branded entertainment, that is, a form of marketing where companies produce entertainment media. The use of video games as a form of advertising is certainly a way to avoid the so-called “ad fatigue” of consumers derived from the overuse of classic advertising since they make viewers associate the brand with positive feelings such as fun and relaxation. As a result, higher levels of brand awareness are recorded (source here).

We could say that the main goal of advergames is reaching an audience that is quite hard to reach through traditional channels, namely Millennials and Gen Z. As highlighted by Marco Segatto in his article published on Project Fun, there are several objectives that can be reached thanks to the use of advergames:

The first advergame dates back to 1978, it was developed for the brand Polo but it was never finished and remained only a prototype. For this reason, the first official advergame seems to be Tapper, an arcade game developed for Budweiser (1983). In this game, players had to serve beer to their customers before they got bothered by waiting too long and collect the empty glasses they left before they fell to the floor. Even if originally the advergame was meant to be sold exclusively to bars, it became so popular that arcades bought them too, therefore to avoid promoting drinking alcohol to children the Budweiser logo was changed to an alcohol-free root beer logo (source here).

To help you understand better, here’s an example by M&M’s:

This M&M’s advergame is a match-3 game, in which the goal of the player is to get points by matching elements of the same color. In this case, the elements the player needs to match are the colored confetti of the brand.

On the other hand, demonstrative advergames are characterized by the fact that the player plays a bigger role in the game, it is quite interactive. For example, it could require the player to create an avatar that he needs to move inside the game universe to reach specific goals. An example of this type of advergame is 3D Vince Carter by Nike, released for the launch of Nike Shox: in this game, players took part in a slam dunk contest and had the ability to customize their Nike shoes and try new models.

The third and last type is associative advergames, also known as in-game advertising. These advergames are characterized by the association between a game and an advertising message. Therefore, the brand and its products are not central to the functioning of the game, nor to the narrative or graphics, resulting in a lower level of interaction than illustrative and demonstrative advergames. An example of an associative advergame is the crossover between Animal Crossing: New Horizons and Milano Fashion Week 2021: many brands, like Maison Valentino and Marc Jacobs, have used the video game to advertise their clothes through a virtual fashion show (source here).

Another example of in-game advertising that still involves Animal Crossing: New Horizons is H&M’s “Loop Island” campaign. This campaign was created to communicate the introduction of the brand’s new eco-friendly solution, the “Loop Machine”, which is the company’s latest innovation for clothing recycling. For the occasion, H&M recruited Maisie Williams, Arya Stark in the Game of Thrones series, and hosted her Animal Crossing avatar on Loop Island. Maisie Williams’s avatar’s task was to attract players to Loop Island to raise young people’s awareness regarding the brand’s sustainable initiative (source here). And she succeeded!

Other examples of famous advergames

In case you were curious about other advergames’ examples, we’ve got you covered: here are some of the most creative ones!

For the occasion of the Nike React launch, Nike tried to rethink part of the customer experience through an advergame called Nike React Land. To try on the new running shoes, customers could visit the stores and take part in a video game similar to Super Mario. The player had to create a personalized avatar by taking a picture at the store entrance and then exploring the levels created to represent the main attributes of the new shoes (soft, light, and bouncy). As the customer explored this virtual world he accumulated points, which later contributed to a final ranking when reaching game over (source here).

Here’s a video of the initiative:

In this advergame, you play as Chiara Ferragni and your mission is to save Matilda, your little dog. The game is a platform game in pixel art, in which you need to be ready to overcome all kinds of obstacles to get through the levels and reach Matilda. The enemies in this game are giant mouths and barbed cacti that recall haters, and to survive you need to have quick reflexes to avoid them. The advergame was created to encourage users to subscribe to Chiara Ferragni Brand’s newsletter and visit the e-commerce site. To play, in fact, the user needs to register and create a new profile that also saves progress. One thing is for sure: Rescue Matilda achieved great results. The game was played in 140 countries by more than 120,000 users, of which 40,000 have also subscribed to the newsletter. Not too bad we’d say!

3. The Scarecrow by Chipotle

This advergame dates back to 2013 and it was a collaboration between Chipotle and Moonbot Studios, who produced both an animated film and an arcade-style adventure mobile game to promote the “Food with Integrity” campaign. The Scarecrow depicts the journey of a scarecrow to bring wholesome food back to people to oppose the fictional industrial giant Crow Foods. Through this game, players can explore this animated world and save confined animals to get them to open pastures, grow crops at Scarecrow Farms and serve healthy food to the citizen of Plenty. With each level, the city of Plenty will get back to how it originally was (source here).

The game, whose goal was that of raising awareness concerning processed food, was a huge success. It sparked the interest of 250,000 users within four days of its release!

Here’s what you need to create a successful advergame

Alright, we saw the definition of advergames and a few examples … but what makes an advergame successful? Let’s find out.

As stated by David Edery and Ethan Mollick in “Changing the Game: How Video Games Are Transforming the Future of Business”, we can identify three keys to success:

Well, you reached the end of the article! What are your thoughts? Do you consider advergames less intrusive than classic advertising? Let us know with a comment, we’re curious!

If you found this topic interesting and this article helped you learn something more, remember to subscribe to our blog to stay updated on gaming-related curiosities!

See you next month!