Splashy Fish – The Adventure of a Flappy Tiny Bird Fish

Splashy Fish is a little fish that swims underwater among ruined columns that constantly change position. After Flappy Bird was removed, Splashy Fish downloads shot sky high in the Apple App Store and Google Play Store in many countries all over the world, thanks to its features, simplicity, challenging gameplay and its appealing 8 bit sound effects.

Tap on your devices to make the clumsy fish move in the Ocean. Avoid obstacles, find all the hidden treasures, calibrate your finger’s touch to level up, and become the King of the Ocean!

Splashy Fish will change its look throughout the game depending on your performance. Golden Wings, Ocean Crown, Shining Beak, Dark Knight Suite and Rockstar Glasses are some of the few features you can unlock as you achieve the game’s targets. Splashy Fish isn’t just a casual swim in the ocean – these columns can change rather quickly between high and low. Adjust your taps so you sail down or float higher to get through the columns. 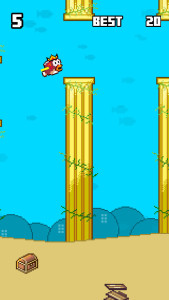